MAKOTO KOBAYASHI inspired robot done for fun, this guy was blocked out from a few months ago.... just got around to doing a paintover. Painted a different version first but felt this angle was a little more dynamic so this version looks a bit chopped up with the details from the other painting, ah well. Fun playing with these really organic forms for something 'mechanical', tried to keep everything a similar aesthetic, but maybe only the ammo canisters in that universe remain familiar (like something you would find on a phalanx or mini gun) to give it some reference point? In hindsight it might look better with some cool organic podform on the back of the gun that they use instead of an ammo tank..... might that further at a later date. The gun has organic sculpted ports that its fingers lock into instead of a traditional handle looking form. Played around with it having canisters attached to the shoulder ports and with some aerials and antenna off the back but thought it looked best really striped back and simple. Thanks for looking. :) 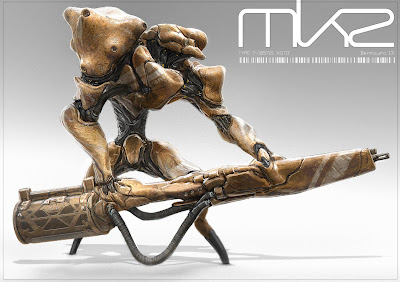 Quick renders of some of the other views of the simple sculpt that i painted over, might take it further later if i get time. 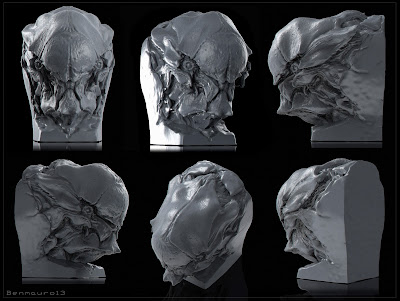 2 years later..... finally getting around to possibly making some 3D prints of this guy. Here was some early tests of a possible stand, still some artifacts here and there where it connect with the stand but i will clean all that up when i decide on a base and send it off to the printers. Also need to make sure its not too front heavy so it doesn't fall forward, i think as it is currently i might need to lengthen the bottom a bit more.
Posted by Ben Mauro at 4:50 PM