Some more warmups and things, sort of a realistic take on a slightly future MGS/Eva/GIS/Appleseed inspired humanoid SWAT robotic soldier for the military, i imagine it would be completely autonomous and/or have some soldiers mind downloaded into this vessel so a team of these guys could be extra lethal with years of combat training augmented by a superior body. Haven't put my designs in environments in a while...a bit rusty to be honest. Mostly 3D with some refinement in Photoshop on the transition areas between the artificial muscles and the robotic areas. Pushing myself to build more detailed/refined hard surfaced stuff in 3D this year after seeing what guys like Vitaly/Furio/Fausto/Gavril/Fields have been smashing out lately...definitely takes a while to get into but seems to be speeding up. Should have much more to share later this year. 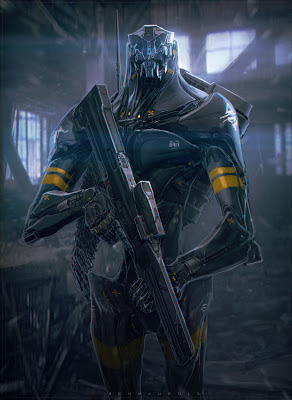 Some little teaser images i did testing out Keyshot before going in and detailing the model more (you can see how rough the model is in these images). 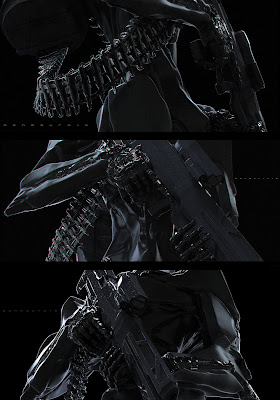 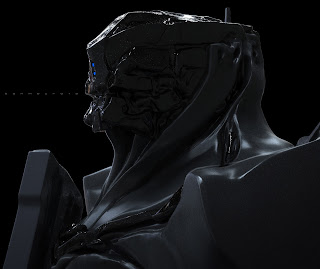 Spent a little more time on the model based on where the paintover went and did some more finished renderings out of keyshot, this is mostly straight out of the program with a little PS work on the decals etc (though you can do that in the program). Could have taken things further, but that's all the time i had to spend on it this week (and probably all the time i will have for a while). Mostly a technical exercise getting some new processes for building complicated hard surfaced designs and rendering pipelines down for class next term, took a bit more time than i would have liked messing around with each program and figuring out how to get both to work together efficiently (on a laptop!), but i think for future designs it will be a really effective combination to create some highly detailed renderings very rapidly, when you see your design looking photoreal in real-time in the keyshot viewport.....its very addicting. Grey renders of the model, still not super detailed but fairly resolved for a concept, would definitely like to push the level of detail much further on future designs. 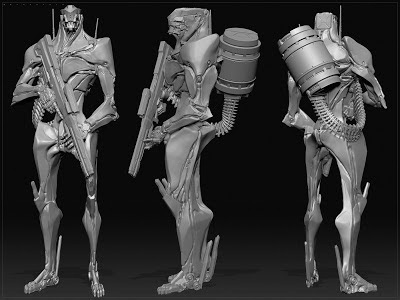 Polygroups on the model before exporting to Keyshot. I am doing everything on my macbook pro so i needed to use decimation master a lot to get the polycount down as much as possible, though i ended up building parts of the lower legs separately then merging them (and not dynameshing into one mesh, i think because i was only planning on doing the upper torso so it was detailed ahead of time then decided to do the full body last minute) so the parts of the body are a bit more dense than i would have liked but i just didn't plan ahead as well as i should have and time had run out so i just had to deal with it. A note to myself for future work when doing this sort of thing. 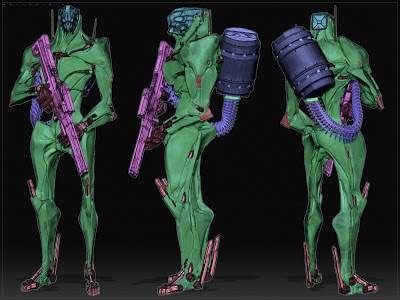