Neato, we finally got clearance to show work that was in film 1! Here was one thing that i know made it into the movie, i will have to go back and check if there was anything else worth showing from the art of books but i wasn't as involved in the films as some of my co-workers. There are a few things here and there that made it through but i put more of my time into ELYSIUM for obvious reasons. ;)

I will try to showcase the basic design process that lead to the Warg (heads) seen in the film. This is actually one of the first things i did at Weta Workshop with ZBrush so excuse my rough as models! Weta Digital did an incredible job bringing them (and everything else in the film) to life. Most of this stuff is pretty standard production art, there wasn't a ton of time in most cases to do sexy paintings/renderings....but that's how it goes a lot of the time.

There were some initial designs done by the fantastic Nick Keller for this version of the film, but Peter seemed to respond to one of the Warg designs from a Gus Hunter environment painting (crop of which can be seen in lower right corner).  My job initially was just to bring this into 3D as that's what we thought he was after. As this design looked very much just like a wolf and less like the hyena looking creatures from 'Lord of the Rings' i created a few other options that bridged the gap from the more wolf looking direction to the hyena looking ones seen in the earlier films. (i will spare your eyes from some of the mankier ones i did!)

First design trying to match the illustration.........and yes, i was asked to draw the glowing eyes and lines coming out of its eyes. 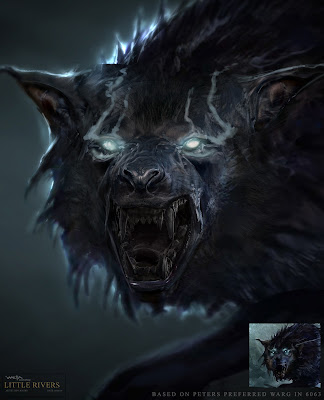 One of the variations attempting to link these wargs to the ones in LoTR. 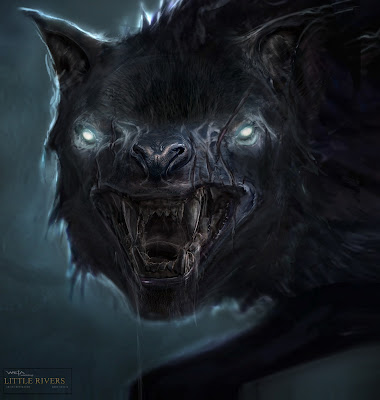 After some feedback we learned that Peter did in fact want to go more in the wolf direction but he only liked the illustration i was given as a starting point. He wanted the Wargs for Hobbit to be more of an exaggerated theatrical embodiment of evil and not something that was just an over-sized anatomically correct wolf where the initial illustrations were going. He referenced the 'Darkness' character from LEGEND as a good example of this idea, if you look at the forms on his face none of them are necessarily 'anatomically correct' but they enhance and embody the evil nature of that character, it is much more iconic and stays with you long after the film is over. 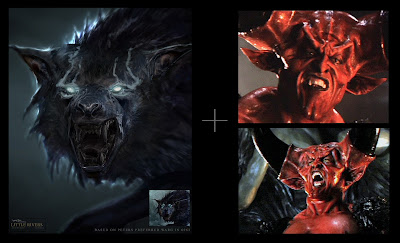 So with that in mind i again did a few more options taking it in that direction, starting more subtlety then increasing how prominent the exaggerated features were in the other options. (again i will save your eyes from the really manky ones!) 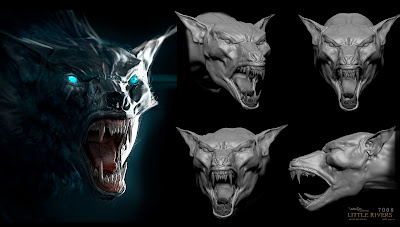 ...and a more intense version, definitely started to look pretty evil in the bottom left view but maybe getting a bit too much in some of the other angles. I think it was a good call though, really made them stand out visually even though we toned things down significantly from this version in the final. 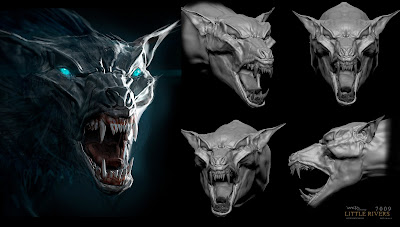 After that, one of the more toned down options was selected and i was asked to sculpt it with a closed mouth which we milled out at the Workshop to build a full size prop/rig of the albino matriarch for the actor playing Azog to sit/act/roar on while on set. I'm not sure if this was the final model used to mill out, i recall being asked to widen the head a little in the back so it was a bit more broad right before i handed it off, will try to track all that down and see if i can find the others. This model and a few of the others were then supplied to Weta Digital where they worked their magic making them extra menacing/realistic and absolutely fantastic in the final film! 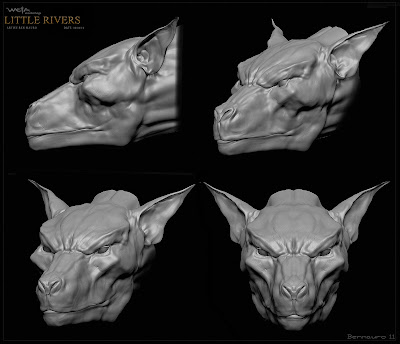 Showing a quick comparison of the final Weta Digital models. (seen in the art of book) 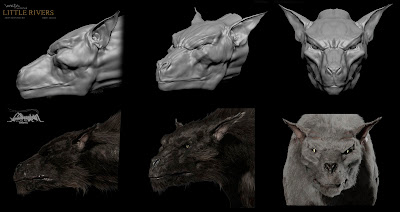 Quick screen grab from the film.