In-Class demo from this week. Painting up the final 'gorilla robot' in a clean version more like a Bradley tank also did a quick digital camo variant but maybe i will post that later. Probably a bit overkill from an illustration/focal point standpoint but the main purpose is just to showcase the model/design in an environment.... will get to some more fun illustrated stuff soon.

You can view the development and work in progress on the model for this in my ZBC sketchbook:
http://www.zbrushcentral.com/showthread.php?149695-Ben-Mauro-Sketchbook/page11 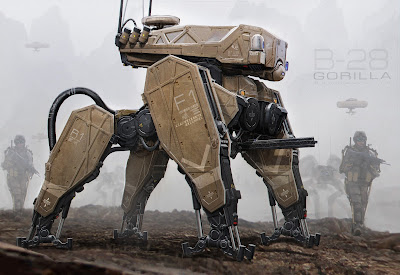 In class demo from this week. Most of the demo's so far have been showing how to use ZBrush to create detailed finished art over a slightly longer period of time but this week i just wanted to demonstrate how we can quickly block out some basic forms/design then do a paintover using photos/painting to get a finished production illustration in a few hours.
So here was that really blurry guy way in the background on the first illustration next to the soldier fleshed out a little more, some sort of smaller carryall type bot..... i call him the CHIMP. Might go and do a more refined 3D/Keyshot version of this guy after i refined the design more in ZBrush working everything out to the same level as the Gorilla or higher. We'll see how everything works out over the next few weeks. 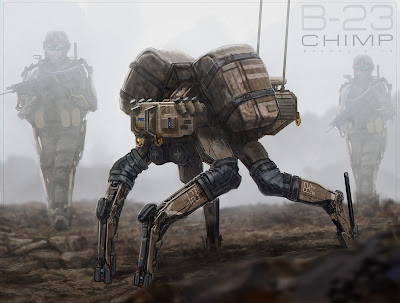 A robot sketch i did earlier this year during Khang Le's demo in AUS, not related to the more realistic gorrila tank robot i did in class but thought i would share instead of letting it collect dust on my HD. 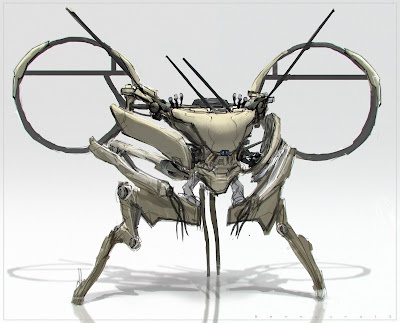